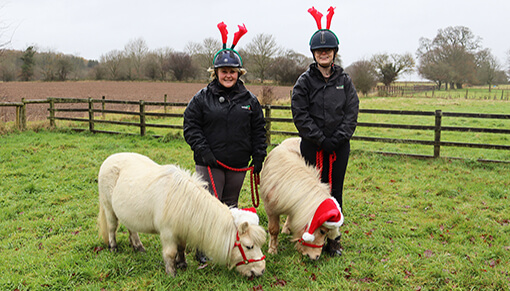 Rescued ponies from Redwings were the guests of honour on the latest episode of ITV’s Love Your Weekend with Alan Titchmarsh.

Shetland pony Tinkerbell and her best friend Miss Muffet recently travelled from their home at our Ada Cole Visitor Centre, outside Harlow in Essex, to meet the popular television host and gardener on Manor Farm in Hampshire.

They were joined by Welsh pony Redwings Puck, who was rehomed from the Sanctuary six years ago, alongside his Guardian, Victoria Gange-Parry.

The full episode, which aired on Sunday 19th December, is available to watch on the ITV Hub by clicking here.

Despite some winter rain, their carers enjoyed a chat with Alan in one of the farm’s paddocks about the vital work of Redwings and our rehoming scheme.

Tinkerbell was born at Redwings in 2008 after her mum Elsie was rescued from appalling neglect at Spindle Farm, Amersham. Elsie and over 100 other horses, ponies and donkeys, including Miss Muffet, had been left without basic care, food and water.

Today, Adoption Star Tinkerbell is available to sponsor through our Adoption Scheme which helps to support the care of all the residents living at the Sanctuary.

Meanwhile, Puck was rescued from the Welsh commons in 2004 when he was discovered in poor condition and struggling to survive. 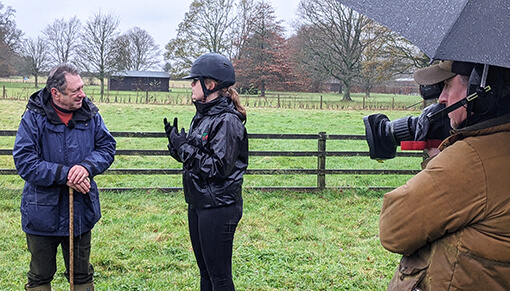 Hollie Palmer, Yard Manager at Redwings Ada Cole who featured in the programme, said: “It was wonderful to meet Alan and have the opportunity to introduce him to some of our rescued ponies.

“While it was a fun day, we really appreciated his interest in what Redwings does to rescue, rehabilitate and rehome horses and donkeys that have suffered neglect or abuse, and for his help in bringing that to a national audience.

“Without the support of the public, Tinkerbell, Miss Muffet and Puck would not be enjoying the fairytale endings they do today, so we hope their stories have inspired others to make a donation or sponsor one of our rescued residents this Christmas so we can help more horses in need, now and in the future.”