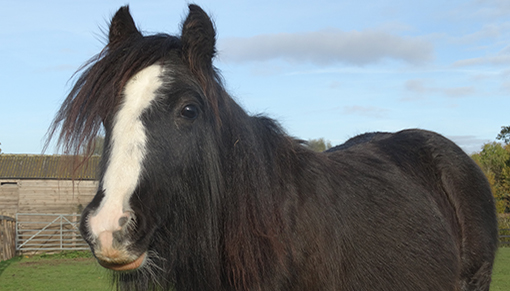 In April 2019, a severely neglected six-month-old foal arrived at Redwings. Found hidden inside a trailer, she was a shadow of the pony she should have been.

Her coat was caked in faeces and her feet were overgrown; she had a severe lice infestation and wounds from sores caused by spending so much time lying down. Most shocking of all, the foal was so weak and underweight that she was unable to stand up by herself.

Whilst the prosecution of the pony’s owner was ongoing, we were legally unable to talk publicly about her. But behind the safe doors of our Sanctuary, our team were hard at work to give this foal the second chance she deserved. Five months later, her owner was jailed for seven offences under the Animal Welfare Act, and we could finally share the foal’s name.

This is Fig’s story.

Fig began treatment from the moment she arrived at Redwings. She was cleaned and clipped, her wounds were bandaged, her feet were X-rayed, and she received medication and worming treatments.

The treatments she required in just her first week with us cost more than £400. During this time, she needed round-the-clock care from our staff, who had to lift her six times every day as she was too weak to stand.

As Fig’s weight improved, she was finally able to stand unaided. But sadly, the extent of her suffering so early in life has left her with long-term problems, including liver damage, requiring ongoing treatment and testing. It’s likely that Fig will continued needing frequent farrier visits too, as her early months spent lying in a confined trailer mean her feet have not grown as they should.

Fig’s special care needs mean only a sanctuary like Redwings can provide her with a home for life. As her slow journey to recovery continues, we are committed to giving Fig the best possible future. 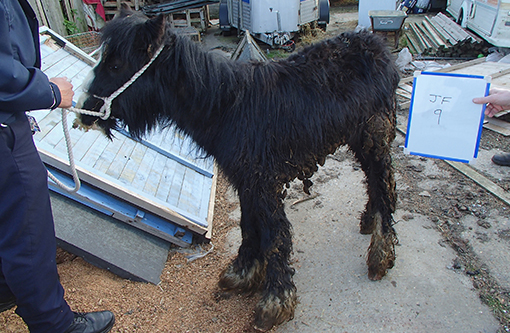 Fig photographed at the time of her rescue.

Whilst we had to keep quiet about Fig’s case, it was donations from people like you that meant we were able to give Fig her a fighting chance. Every blood test, X-ray and treatment was funded by donations from our supporters.

Your donation today can help us continue caring for Fig and giving a new start to more ponies like her*.

*Your donation will be used wherever it is needed most and could help to fund the ongoing recovery, treatment and care of all our rescued residents.